Skip to main content
Coronavirus (COVID-19) Update: Our firm is open and serving the needs of existing and new clients. Click here for more information.

Workers’ Comp for Stress and Anxiety in California 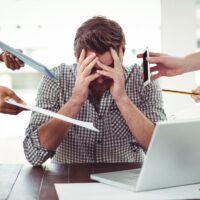 Work-related stress and anxiety is a serious matter that can affect job performance, quality of life, and even the ability to work at all. Stress by itself is not, however, considered a workplace disorder. To get workers’ compensation coverage for stress, the stress must cause a covered psychiatric injury. Workers’ compensation law recognizes mental disorders that are identified in the Diagnostic and Statistical Manual of Mental Disorders (DSM-V) published by the American Psychiatric Association (APA). The DSM-V includes disorders such as:

If you are a covered employee in California and you suffer from a psychiatric disorder such as those identified above, and your condition was caused by or exacerbated by your working conditions, you might be able to benefit from workers’ compensation.

Proving a Workers’ Comp Claim Based on Job Stress

To get workers’ compensation for a psychiatric injury, just as with a physical injury, you must be able to demonstrate that your injury was caused by your job. That means that you need to show that your working conditions were so stressful and severe that they caused you to develop anxiety, PTSD, depression, or some other mental disorder. Mental conditions may be compensable whether they result from a physical injury (e.g., functional limitations after an accident cause stress, which in turn causes anxiety or depression), or if they result directly from overly stressful working conditions.

California Labor Code Section 3208.3 lays out specific requirements that must be met before a mental disorder will qualify for workers’ compensation benefits. These requirements are more stringent than physical injury and include, for example:

● Job stress was the predominant cause (more than 50%) of your condition
● You worked for that employer for at least six months
● The reason for the condition was not a good faith, non-discriminatory personnel action (such as a negative performance review, change in job assignments or location, or decisions regarding a promotion)
Stress caused by termination or layoff is generally not covered unless the employer knew about the worker’s psychological condition before notice of termination or layoff. Additionally, in California, stress and other psychiatric injury claims must be backed up by detailed testimony from a doctor. Your doctor will be required to provide a thorough and reasoned review of your background, including your developmental history, personal problems, job satisfaction, academic and military records, and even your performance reviews. They may also include depositions and statements from friends, family and coworkers.

If you’ve been hurt on the job in Southern California, get help securing the insurance coverage and other money damages you deserve for your injuries. Contact the seasoned and talented Arcadia workers’ compensation lawyers at the Law Offices of Dulio R. Chavez II and Associates for a free consultation at 626-357-3303.