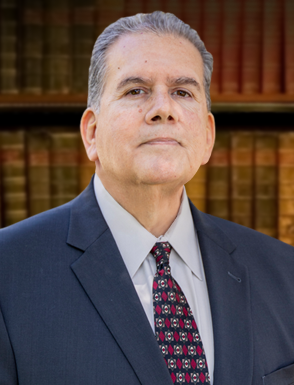 Dulio R. Chavez, II is the founder and principal attorney at the Law Offices of Dulio R. Chavez, II & Associates, a Pasadena law firm serving the people of Los Angeles and statewide in the areas of California workers’ compensation law, personal injury and criminal defense.

A lifelong resident of California, Dulio Chavez earned his undergraduate degree from California State University, Northridge (CSUN), where he served as Chairman of the Mexican-American student civil rights group MEChA as well as President of the university’s Pre-Law Society. He later earned his law degree from LaVerne University School of Law and is admitted to practice in all California state courts.

A Calling to Serve Justice

Dulio Chavez grew up in Delano, California, a small northern California town and farming community home to a large grape-growing area. It was here that another man named Chavez – Cesar Chavez – organized farm workers and led a nationwide boycott of California grapes in protest of working conditions, an action that has come to be known as the Delano grape strike. Delano was a community where you could quite literally see the disparity between the wealthy and the working class – the landowners and the migrant workers – depending on which side of the railroad tracks people lived. These early experiences instilled a call for justice in young Dulio, and in over 22 years of legal practice, he has recovered millions of dollars for Californians injured on the job, always with a focus on the lives and needs of working individuals and their families.

A Commitment to Injured Workers and the Legal Community

Mr. Chavez retains a strong commitment to advancing the legal profession in Los Angeles and California. He is a member of the Workers’ Compensation and Criminal Law sections of the California Lawyers Association and is a member of the Los Angeles County Bar Association and the Mexican American Bar Association. He is additionally active in the California Applicants’ Attorneys Association, an advocacy organization for workers injured on the job, as well as Latino Comp, a non-profit Latina/Latino association of workers’ compensation professionals focused on providing continuing legal educational programs to enhance the quality of representation at the Workers’ Compensation Appeals Board and better serve the community.

Devoted to Family, Faith and Fellowship

Dulio Chavez has been married to his wife, Irma, for over 25 years. They are the proud parents of their adult son, Dulio Chavez, III. In addition to spending time with family, Dulio enjoys listening to and playing music (guitar and bass), travel, reading and sports. He is a long-time supporter of the United Farm Workers (UFW) and is a member of Fellowship Monrovia. He can be contacted at the Law Offices of Dulio R. Chavez, II & Associates at 626-357-3303.