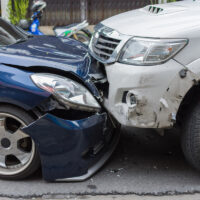 Driving under the influence of any mind-altering substance puts everyone on the road at risk of serious injury or worse.  Passengers, pedestrians, and other drivers are all potential victims of drugged or drunk driving accidents.  Drivers who cause accidents while under the influence are open to significant liability, both criminally and in civil court.  Alcohol was a suspected contributing factor in a recent multi-vehicle crash in Orange County.  Read on for details about the accident, and contact a dedicated Monrovia personal injury lawyer if you’ve been injured by a drugged, drunk, or otherwise negligent driver in Los Angeles or the Inland Empire.

At around 2:45 a.m. on a recent Friday night, a truck and a Toyota Prius were traveling southbound in two open lanes on the 405 Freeway in Fountain Valley when they were approached from behind by a speeding Chrysler.  The Chrysler crashed into both of the other two vehicles just south of Warner Avenue, causing the Prius to veer left and smash into a California Highway Patrol (CHP) vehicle that was stopped with its hazard lights on near Bushard Street.  The CHP car suffered significant rear-end damage.  Southbound lanes on the 405 were closed between Warner and Brookhurst until around 7 a.m. the following morning.

Two CHP officers were injured in the accident, one with injuries described as “major,” although both were described as awake and alert when they were transported to a nearby hospital.  Two of the other drivers involved in the wreck were also injured and hospitalized.  Thankfully, no one was killed.  Authorities arrested the driver of the Chrysler on suspicion of DUI.

The Chrysler driver may face criminal penalties if it is proven that he was under the influence of alcohol at the time of the crash.  Regardless, he is open to a civil suit by the other drivers involved in the wreck unless he can prove that he was not negligent despite speeding and crashing into multiple cars.  Crashing while under the influence may open up the possibility of punitive damages as well as compensatory damages for injuries suffered.

If you’ve been hurt by a reckless driver in Southern California and need help recovering the money damages you deserve for your injuries, contact the skilled and effective Arcadia car accident lawyers at the Law Offices of Dulio R. Chavez II and Associates for a free consultation at 626-357-3303.